HomeNew Survey Shows Growth of Visibility of CSOs in Croatia

New Survey Shows Growth of Visibility of CSOs in Croatia

The public opinion survey “Visibility and Public Perception of Civil Society Organizations in Croatia 2012”, commissioned by TACSO Office in Croatia and conducted by the Institute of Social Sciences Ivo Pilar, indicates a growing visibility of NGOs in Croatian public. According to the survey, presented last month, the public perception of NGOs didn’t change significantly compared to the situation in the mid-2000s.

„Just 10 years ago, Croatians viewed civil society organisation as mere mercenaries working for foreign interests to 'undermine the Croatian state', and yet today we see they have largely changed that position“, Deutsche Welle says in its report on the survey, carried by Croatian portal H-alter.hr.

The survey shows, for example, that almost one half (48%) of polled citizens expressed willingness to get involved in the work and activities of NGOs, compared to 36% in 2007. That willingness is greater with young citizens, working population, citizens with higher education and left political leanings.

In general, the citizens are more satisfied with NGO contributions in the area of raising citizens' awareness about their rights, improved quality of life and development of civil society and democracy than they are with the contributions in the areas of to solving life's problems, the participation of citizens in decision-making processes and in shaping policy in areas that affect daily lives.. 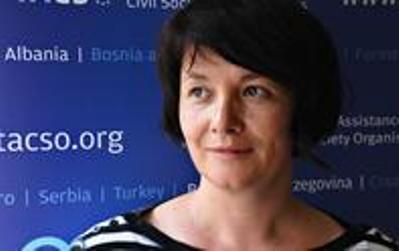 TACSO advisor Aida Bagić (photograph taken from H-alter.hr)"That is a cause of concern, having in mind that those points are the declared mission of many associations. However, there is a growing number of people who said they felt concrete benefits from the work of associations, from 2 to 10 percent over the past five years”, Aida Bagić, advisor with TACSO told Deutsche Welle.

The survey was conducted nationally, from April 10 to May 11, 2012, on a representative sample of 1008 citizens. The complete report from the survey is available on the internet site of the Institute of Social Sciences „Ivo Pilar“. (Source: Institute Ivo Pilar/h-alter.hr/Deutsche Welle)